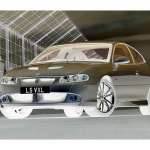 Hello! I recently completed my bachelor's degree in digital media, and in my spare time I am an avid gamer and car enthusiast. Sometimes I don't have enough spare time...but I add information on the wikis I follow the most. I mostly play racing games but sometimes I play games such as Call of Duty, Battlefield, or any of the recent South Park games. I became a Wikia user in 2017, and noticed that there are some wikis missing some information...or in the case of the Tokyo Xtreme Racer wiki, A LOT of information. And that's where I stepped in.

I have played games in the Tokyo Xtreme Racer series since 2005. I've owned Tokyo Xtreme Racer 3 (the first TXR game I owned), Tokyo Xtreme Racer Drift, Tokyo Xtreme Racer Drift 2, and Import Tuner Challenge at some point in my life, and had some experience with the other titles at a friend's house. Unfortunately, there is no footage of my gameplay as I was undefeated for the most part. The TXR games helped me achieve unrealistic dreams I had, including racing on Japan's highways, driving and tuning Supras, Skylines, etc., and designing custom paint schemes. However, after I was able to look at some JDM cars at a specialty car dealer (in the US), and even getting in the driver's seat of a 1992 Nissan Skyline GTS Turbo (right-hand drive!), some of these dreams were realistic.

In TXR3, I owned multiple 8-bit pattern camouflage cars (I did the camo designs myself) and I've beaten Jintei at one point, but one day I accidentally overwritten that game save with another Quest mode file. I did have a different Quest mode on another memory card that was in stage 2, but without the camouflage cars (second playthrough). I have done a total three different playthroughs (I'll refer to playthroughs as "#PT") in TXR3. Eventually I brought back the camouflage cars in my 3PT and created several Quest mode profiles on the many PS2 memory cards I own, with each profile starting with a different car and location. I had many cars with partially-finished paint jobs but here are the completed finished camouflage cars I had at one point or another in TXR3:

I did defeat Electric Shark while driving a Daihatsu Move once - I battled Osaka Blond, but didn't realize that driving with flashers on and hitting walls (which occurred during the battle) would cause Electric Shark to appear once that battle was finished :/ The full experience can be found under Electric Shark's wiki page within the Rivals:TXR3 section.

As for the Wanderers with the time requirements (Past 12 o'clock Cinderella, The Death Driver, Master Position), I did defeat them at some point without having to change my PS2's clock (it was, and still is, set to North American EST 12-hour time) by meeting the other part of the requirements (I defeated Past 12 o'clock Cinderella and Master Position with the same car - a Corvette). The Death Driver just appeared randomly in the Kasumigaseki tunnel on the second and third playthroughs.

During the timeframe in which I was playing TXR3, I had no idea that there was more detailed Wanderer requirement information online, nor did I know about Gameshark and having to "cheat" to defeat Whirlwind Fanfare. "Her hobby is chasing bands?" How does that tell me that 100,000,000 CP is needed to battle her? I thought that meant have 5+ cars or something along those lines (in Import Tuner Challenge, she'll race anyone with 3 or more cars). Otherwise I would have finished the game quickly. Other notable times where a vague Wanderer requirement resulted in a "no show" or "repeatedly battle canceled" included:

Well, now I know this stuff, mainly because I've contributed it to this wiki.

As for ITC, I owned a lime green Toyota Crown with a license plate that read "CROWN3D" - that was my primary car there although I owned just about everything else in that game too. I completed 99% of ITC without a loss, but two Wanderers, Bright Age and Shinji the Harbinger, never showed up and I never got a chance to race the Devil Z driven by ???, and therefore never finished the game. The most intriguing rival from Import Tuner Challenge was Unbalanced Ishii; his requirement made me laugh, as well as the battle afterward. Even with mismatched wheels and unbalanced tires, I still made him eat my dust. I actually took his street name to new heights by referring to cars in real life with mismatched wheels as "Unbalanced Ishiis" (which I continue to do to this day).

I didn't get too far into TXRD (drove a Toyota Vitz RS 1.5 - I regret that decision), but I did own a Mazda6 followed up by a Toyota Caldina in TXRD2, each with the Mazoria color (the color-changing paint job). The Caldina was a fun car and I was dominating! But I never realized that I didn't face more than half of the game's rivals until I discovered the full rival list.

I haven't actually had a lot of time to play these games - I ended up getting rid of ITC - along with my first Xbox 360 and all of its games - after that Xbox 360 had the dreaded "Red Ring of Death." I did sell TXRD and TXRD2 (as well as other non-TXR titles not listed here) while in college due to the reduced time I have to play video games and that I spent more time on certain titles. But I can still give you a lot of TXR-related information if you asked me, and TXR isn't out of my life and will never be out of my life - I am still passionate about it and I have friends who own the games too, so I play those games when I am over with them. I might even re-buy ITC, TXRD, and TXRD2 if I get the chance :)

Someday I might even design my own video game - it is a real possibility!

Retrieved from "https://tokyoxtremeracer.fandom.com/wiki/User:MadDriver100?oldid=19455"
Community content is available under CC-BY-SA unless otherwise noted.